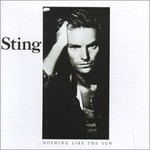 It's the only form of protest they're allowed
I've seen their silent faces scream so loud
If they were to speak these words they'd go missing too
Another woman on a torture table what else can they do
[...]

Hey Mr. Pinochet
You've sown a bitter crop
It's foreign money that supports you
One day the money's going to stop
No wages for your torturers
No budget for your guns
Can you think of your own mother
Dancin' with her invisible son